Intraday technical levels and trading recommendations for GBP/USD for January 14, 2019 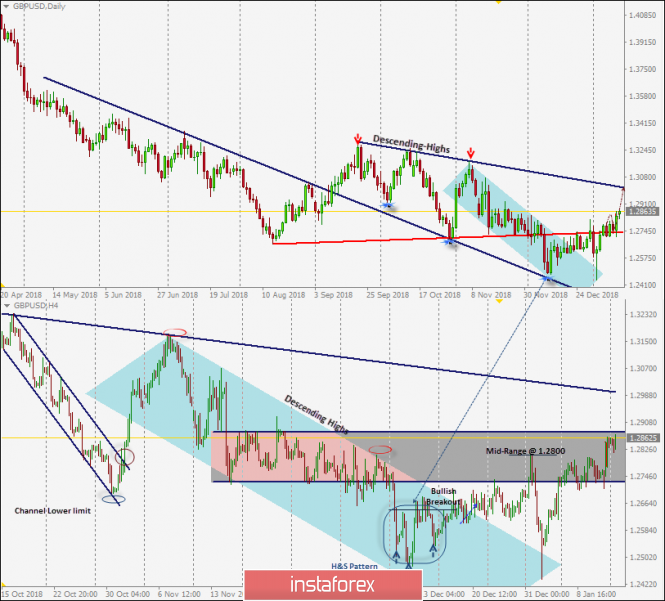 Since mid-November, Successive Lower Highs were demonstrated around the price levels of 1.3060, 1.2920 and 1.2800 maintaining movement within the depicted H4 bearish channel

On December 31, an early bullish breakout attempt above 1.2720 was demonstrated on the H4 chart. However, the market failed to maintain sufficient bullish momentum above 1.2800 (mid-range of the depicted consolidation range).

That's why, another bearish pullback was executed towards 1.2500 (backside of the broken channel) where significant bullish recovery was demonstrated two weeks ago.

Bullish persistence above 1.2800 (Mid-Range) is mandatory for buyers. Any decline below 1.2800 invalidates the bullish scenario bringing the GBP/USD pair again into sideway consolidations that may extend down towards 1.2720 (Lower limit of the depicted consolidation range).

On the other hand, the price level of 1.2880 stands as an intraday key-resistance corresponding to the upper limit of the previous consolidation zone (1.2720-1.2880).

A strong bullish breakout above 1.2880 is mandatory for Buyers as a valid BUY signal to look for further bullish advancement towards 1.3000 initially.