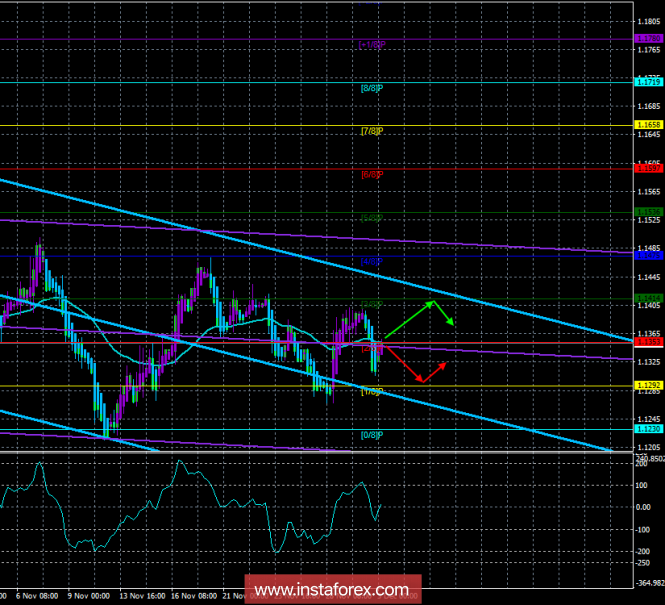 The currency pair EUR / USD on Monday, December 3, shows moderate growth, although trading on Friday ended with the advantage of the US currency. At the G20 summit, negotiations were held between the leaders of the United States and China regarding trade duties. Trump previously introduced duties on Chinese products at a rate of 10% and threatened to increase them to 25%. However, the parties at the first stage of the negotiations managed to agree that the new duties would not be introduced yet. In exchange, China will have to increase the volume of imported products from the United States. It's too early to say that the parties have come to a complete consensus. Knowing the policy of Donald Trump, with the slightest mismatch of expectations with reality, a new round of threats and sanctions against Beijing can begin. Given the fact that the trade balance between the countries has a big imbalance in the direction of the States, it is not beneficial for China to fight with Washington. So far it is also impossible to say that amid the easing of tension in relations between the States and China, the US dollar has strengthened strongly or is ready to fall. We believe that the theme of the trade war will no longer support the US currency. If only because the escalation of the conflict would not be beneficial for the US either, and de-escalation, logically, should, on the contrary, create pressure on the dollar. Today in the United States, index of business activity in the manufacturing sector ISM will be published, you should pay attention to it.

The EUR / USD currency pair has once again fixed above the MA. Therefore, at the moment, long positions in small lots with a target of 1.1414 have become relevant again. A reversal of the Heikin Ashi indicator downwards indicates at least a new round of downward correction.

It is recommended to open sell orders with a target of 1.1292 after fixing the pair below the moving average line, which is still the more likely option.

In addition to the technical picture, you should also consider the fundamental data and the time of their release.

The senior linear regression channel is the blue lines of the unidirectional movement.

The younger linear regression channel is the purple lines of the unidirectional movement.

The moving average (20; smoothed) is the blue line on the price chart.

Heikin Ashi is an indicator that colors bars in blue or purple.