AUD / USD: after the release of GDP, the Australian received a ticket to the south - ConsultFX

AUD / USD: after the release of GDP, the Australian received a ticket to the south

The Australian dollar is actively cheaper for the fourth day in a row, having lost more than 150 points. Optimism about a possible truce between China and the United States has been replaced by pessimism about the growth of the Australian economy. The latest data on the growth of the country's GDP disappointed traders , and thus, moved all other fundamental factors faded into the background. Even a weakening US dollar does not save the position of aud / usd: the pair is confidently heading south, to the nearest target at the moment, 0.7190.

The report on the growth of the Australian economy is quite disappointing: in quarterly terms, GDP grew by only 0.3% - this is the weakest result in the past two years. In annual terms, the indicator continued its downward trend, reaching 2.8%. In the second quarter, GDP increased by 3% compared to the same period last year, while the initial estimate was at 3.4%. All these indicators were much worse than forecasts, causing a justified alarm for aud / usd traders. 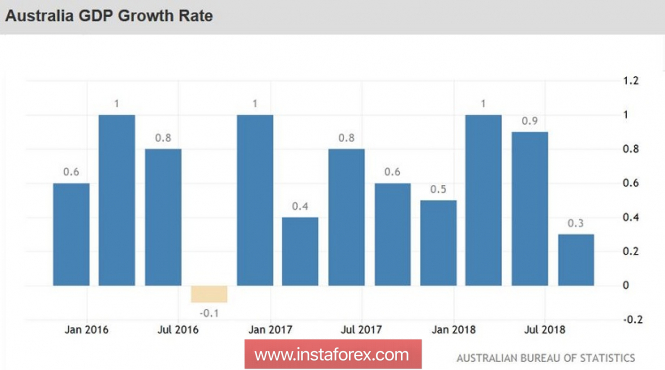 The fact is that the Reserve Bank of Australia literally on the eve of the disappointing release held its December meeting, at which he optimistic about the economic activity of the country. Thus, the head of the RBA, Philip Low, said that the regulator expects GDP to grow by 3.5% against the background of expanding investment and government spending on infrastructure development. The secondary preceding indicators indirectly confirmed the optimism of the head of the RBA. However, just the next day, the published figures of the key release "otrezvili" market participants.

The structure of published data suggests that Australian consumers have significantly reduced their costs due to weak wage growth. Consumer spending in the third quarter increased by 0.3%, while the average salary in July-September - only 0.2%. Such a symbolic increase in wages has a negative impact not only on the dynamics of GDP, but also on inflationary processes. In addition, household budgets are still under pressure due to rising debt: according to the latest data, Australia has one of the highest levels of household debt in the developed countries of the world. This problem has long been worrying members of the Australian regulator. Last year, one of them even proposed to soften the conditions of monetary policy in order to influence the situation.

At the moment, the regulator does not discuss the option of reducing the rate, but the big question now lies on the prospects for its increase. The baseline scenario assumes that RBA members will consider this issue at the end of 2019, at the end of the fall or at the December meeting. But if the Australian economy continues to show similar dynamics, the Central Bank will certainly shift this benchmark by 2020 (as the Reserve Bank of New Zealand has already done). For example, after the publication of the latest data, RBA bet futures suggest that the market has halved the likelihood of a rate hike at the December meeting of the Australian Central Bank. If earlier traders laid a 40 percent probability, now they are only 20% sure of this.

Naturally, this picture has a significant pressure on the Australian dollar, especially since the other fundamental factors are also negative. For example, the cost of iron ore - a strategically important raw material for the Australian economy - has been falling for several weeks in a row. If at the beginning of November, the ton cost 74 dollars, now it is being traded at around 65 dollars. The market is concerned about the decline in demand from the main trading partner of Australia - China. Moreover, according to experts, in the coming months, the demand for ore will show a downward trend. The imbalance of supply and demand will inevitably affect the pricing policy, which in turn will put pressure on the Australian dollar.

Against the background of such pessimism, the US-China trade negotiations faded into the background. The first emotions from the results of the G20 have passed, and now the financial world is frozen in anticipation of a broad trading deal. According to rumors, the negotiations of the parties are not going as smoothly and harmoniously as the leaders of the United States and China would like. For example, Donald Trump on his Twitter recently said that Beijing has agreed to lower tariffs on American cars. However, a little later, White House Economic Adviser Larry Kudlow denied this information. according to him, the relevant agreement does exist, but it has not been signed yet.

Thus, a pair of aud / usd has a wide potential for further reduction - at least until such time as Washington and Beijing announce a breakthrough in negotiations. The weakness of the US currency in this context should be used as a pretext for opening short positions (in particular, if Nonfarma comes out worse than expected today). The nearest southern target is 0.7190, which corresponds to the lower boundary of the Kumo cloud on the daily chart. The next target is the mark 0.7165 - this is the bottom line of the Bollinger Bands indicator on the same timeframe.